This edition of The FinTech Blog features thought leader Julian Levy, a mentor for the FinTech Innovation Lab in London and well-known advisor to investors in technology, including both venture capital and private equity firms.

The context for FinTech in 2016-2017 requires looking back to the what happened after  2008 financial crisis when unprecedented challenges were faced by incumbents, but many pulled through by restructuring, deleveraging, shedding non-core assets, writing down assets, increasing provisions, and decreasing operating costs.

The road ahead, however, presents challenges and opportunities from new entrants, often called fintech firms, seeking to disrupt the incumbents.

How much is at risk? According to research from Citi, 44% of the business from existing financial services companies could be taken by startups, while McKinsey estimates up to 60% could be taken by fintech firms in the coming decade. 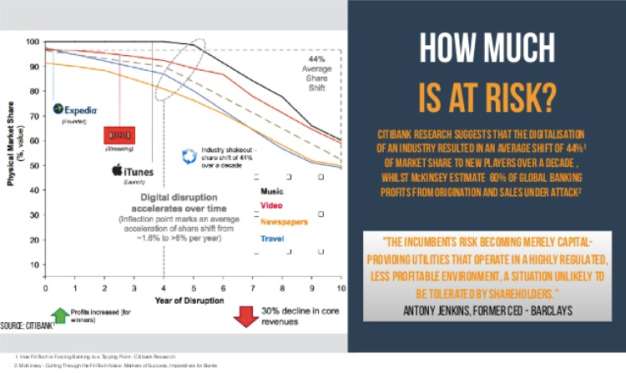 How much is hype?

There are seven areas where fintech firms are challenging incumbents (including
five where it directly involves retail banking): money transfers/foreign exchange, lending, payments, aggregation, and investments. 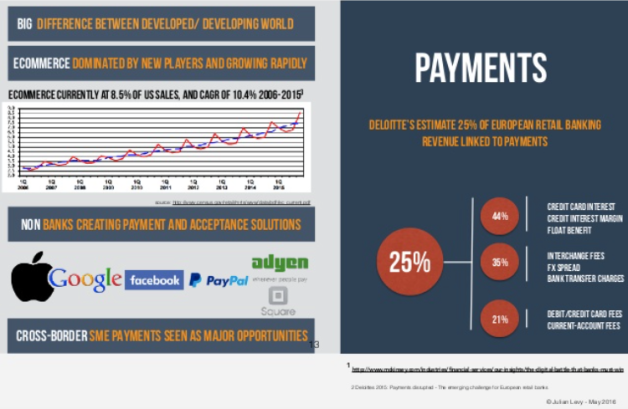 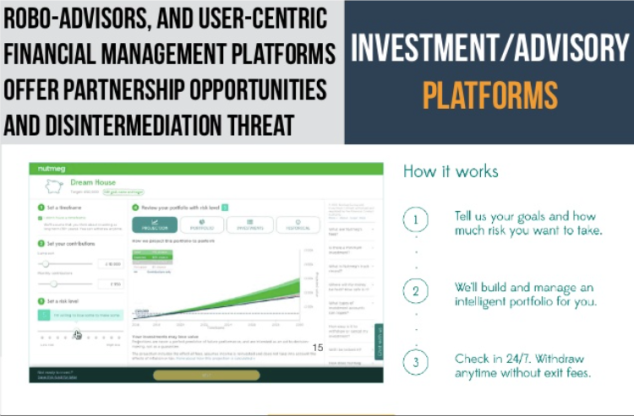 Why Now? There are multiple factors accelerating the rate of change and driving the growth of fintech startups ranging from the current wave of Digital “natives” to new technology, and other factors.

So, what happens next? For incumbents, fear not since banks have massive scale, trusted brands, lots of data, big balance sheets, a physical network, lots of customers and in many cases, an appetite to change (as seen in deals such as the UBS/SigFig partnership, acquisitions, and accelerators, such as the FinTech Innovation Lab).

Meanwhile, the stumbles over the last year by LendingClub, OnDeck, Avant and Prosper show that the startups have plenty to learn as we look ahead to 2018.

So, where to next?

Note: This is an abbreviated version of a longer presentation.

Julian Levy is the founder of Ayarma that provides a range of advisory and technology due-diligence services to corporate development teams, as well as venture capital and private equity firms. Earlier he was an executive in residence at Index Ventures where he focused on enterprise technology and advised Key Capital AG on its investments in technology, infrastructure, applications leveraging machine learning and security.