One of the must-attend FinTech events is LendIt USA, which took place April 11-12 here in San Francisco. LendIt is a key conference where a cadre of investors, executives and startups get together to learn, network and do deals in the non-bank lending space.

I caught up with three pioneers coming to LendIt: Ron Suber, President of Prosper; AdaPia d’Errico, CMO of Patch of Land, and Brendan Ross, CEO of Direct Lending Investments to talk about LendIt and talk about their involvement.

“Lendit is an annual event by which many measure time, progress or growth. I expect to see venture investors, funds and others looking for high quality, alternative finance and lending companies to evaluate for investment and partnership,” d’Errico says.

At Prosper’s offices in San Francisco, CEO Ron Suber comes across as highly confident in the prospects of the industry he represents, as one of the leading marketplace lenders.

“How have you been?” I learned is Ron’s general greeting, even when meeting someone for the first time; he introduced me to Aaron Vermut, a friend of Andy Bond, a NYC-based former colleague of mine at Scient, but focused our conversation on MaxMyInterest.

Since the New York Times was waiting for him after we spoke, we did speak about P2P, but mostly chatted about his angel investments, including Patch of Land and Apple Pie Capital (watch its 2015 LendIt Presentation), a rival to fintech company Funding Wonder I was an advisor to prior to joining MaxMyInterest.

Prosper is one of the Platinum sponsor of LendIt USA 2016 and announced its ending its relationship with Citi, which was a big partnership announcement last year.

While companies such as Prosper garner attention (given their position as one of the largest FinTech firms, with a private valuation of $1.8B), I found a lot of insight speaking to smaller, innovative firms that were able to say more about where alt lending is headed.

Direct Lending Investments CEO Ross says: “I’ve been at LendIt from the beginning, when few people were attending. Going now is like a reunion, where you see people you’ve known for a long time.”

In 2016, Ross says alternative lending faces the challenges of having too many lenders vs. borrowers, and finding customers without direct mail or paying for brokers. That will be one of the key conversations to follow at LendIt 2016.

How is Direct Lending Investments succeeding?  Ross says “we add  value by focusing on profitable niche markets. Being a fund vs. a web site trying to do everything has been critical,” Ross says, adding that DLI “adds value for our investors by sourcing unique dealflow – being focused on areas of lending that are not served well by banks.”

Ross brings a range set of experience across wealth management, as a turnaround CEO, along with expertise in private credit having purchased over $1 billion in loans and receivables from non-bank lenders (more than any other investor worldwide).

But he credits success to his team, including Dr. Bryce Mason, DLI’s Chief Investment Officer, with deep experience in independent loan scoring models and loan portfolios. James Alexander – a former banker from Goldman –  rounds out the management team. 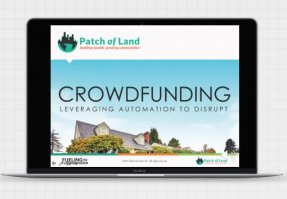 Patch of Land’s CMO d’Errico told me LendIt has “been a pivotal event for me and Patch of Land since our first appearance in 2014.”

This year, she was a mentor for PitchIt, where she work with startups in alternative lending space. “I can already tell by working with the finalists that the level at which these startups are operating is world-class,” she says.

D’Errico also shared that Patch of Land hit two milestones: having  originated over $100 million in short-term loans for real estate professionals who purchase, rehabilitate and refinance undervalued residential and commercial properties; and returned over $25 million in principal and interest to its investors.

What’s remarkable about this news is that Patch of Land is still 85% crowdfunded, unlike a lot of firms like Prosper  that receive most of their funding from institutional investors.

One big piece of news this year is the decision by SoFi to stay away from LendIt. They are #notabank and also #notatlendit, causing some to speculate why. A common theory is SoFi is looking to separate itself from the category of lender, as it works to promote itself as a broader provider of services with a more unique positioning.

Overall, the reaction from many at LendIt USA 2016 was that the event was quite different from 2015, when the euphoria over the Lending Club IPO was still dominant, and many providers were trumpeting their recent funding rounds.

This year’s LendIt was still a great event, but as one noted, it’s more like an asset-backed lending conference (just without the banks, and with a hefty dose of startups that you might otherwise see at Money 20/20 or Finovate).