Michael Halloran sat down recently with Sasha Orloff, Co-Founder and CEO of LendUp at its offices in San Francisco.

MH: It’s been a couple of months since we spoke. How are things going at LendUp?

SO: We’re growing. As you can see, we’re getting ready to move to bigger offices and are hiring employees as we expand LendUp into more states around the U.S, and grow the business.

MH: Let’s start with journey that led to the founding of LendUp. 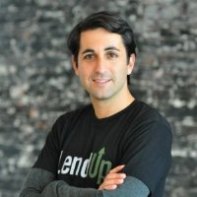 SO: Sure. I graduated in 1999, during the dot-com boom period when the Bay Area, like today, was an exciting place with a lot of startups. I worked at a place called Ingenio.com that was acquired by AT&T.

Around that time, I read Banker to the Poor and got in touch with the author and founder of The Grameen Foundation. I was asked to spend six months in Honduras, but ended up working three years in Honduras, Mexico & D.C. creating software to help microfinance institutions. Later, after grad school, I joined Citi in New York.

SO: I was in a rotation program. I worked in risk management, online acquisitions, finance and customer insights. It was a great experience, but I was frustrated. Each time I’d want to ask questions and develop predictive analytics, or test the user experience, or identify product innovation I was told what I wanted to do couldn’t be done. My brother, who later co-founded LendUp with me, and who was an early software developer at Yahoo, kept telling me that I had a software problem.

I went on to join Citi Ventures where I worked with Debby Hopkins, its founder and others, where I got exposure to a lot of entrepreneurs and businesses in FinTech.

MH: It was around then you decided to found LendUp, wasn’t it? 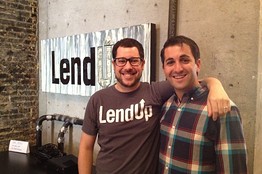 SO: That’s right. My brother, who was now at Zynga, and I were talking about expanding access to financial services. To take what I’d learned at Grameen and seen was hard to do at places like Citi. Jake again told me I had a software problem. So we decided right then to start LendUp.

MH: I remember from our first meeting that you explained that you “architected” the business so that LendUp cannot make money from people who fall into a cycle of debt. But it’s got to be a hard to operate in a segment that’s garnered a lot of controversy, i.e. just saying payday lending gets people up in arms.

My brother kept telling me that I had a software problem.

SO: Definitely. It’s an ongoing challenge. You have individuals ranging from financial journalists to television personalities saying don’t ever take a payday loan, but they’re really not speaking from deep knowledge of this market. The alternative is not a low-cost home equity loan. The alternative is often a far worse choice.

We lend to the people who the bank can’t or won’t approve. But in order to compete and build a huge business, you have to be faster, smarter, and have a better understanding of the customers problems to not make revenue through the “debt traps” of our competitors.

That is where software and advanced statistical analytics come into play. We built our entire platform from scratch, with every competitive advantage Silicon Valley has to offer.

MH: What are the goals of LendUp?

SO: We set up LendUp to do three things. First, we set out to improve people’s lives. We are the only lender in our segment that reports to the credit agencies so we can help borrowers build a credit history. Second, we want to be safe and transparent. We don’t hide what we charge. We put it out there. Third, we want to be convenient – to help save people’s time.

MH: I think of saving time as something people who can afford it are willing to pay for, i.e. convenience. Why time?

SO: You can make a huge social impact just by saving people time. A lot of people get a payday loan to help them through a situation like paying for a car repair. By saving them time through being online and mobile, we make a big difference to people, allowing people to not take time off work or be able to pick up their children at school.

MH: Let’s talk about the product and the platform. How does it save people time and how was it built?

Real-time decision-making is critical for us…

SO: As I mentioned, real-time decision-making is critical for us. We built our platform to enable much faster decisions for people to save them time and provide convenience. You can apply in 5 minutes, and get an instant decision. Customers can get money in their account in 15 minutes. We’re also a direct lender and are 100% transparent.

It’s all a custom build solution. Our code is written in Java, partly due to make it easier to connect to other systems and partly for the ability to find good engineers.

I’m passionate about analytics and we spend a lot of time thinking about creating predictive models, as well as making our systems easy to use from a UX standpoint and mobile optimized.

MH: Can you summarize the concept of the Ladder at LendUp?

SO: Sure. We lend small amounts of money to high risk borrowers – those that banks don’t approve. And as they build a credit history, we automatically allow them to borrow more money at lower rates for longer periods of time. That is the ladder:  there are currently 4 levels – silver, gold, platinum and prime.

We know how important financial education is. It’s too bad that many banks don’t focus on this. In exchange for watching videos on topics like managing your finances and paying on time, the APR is automatically lowered for customers.

SO: That’s right. Beyond education, we use behavior to reward people for doing the right thing. We have great analytics and can see that banks are not able to meet needs of the communities, and payday stores have popped up to meet those in certain geographies. But that still doesn’t help reach everyone in the community, not to mention payday lenders don’t help borrowers improve their credit and lower their APR’s.

With the near universality of smart phones, almost everyone is now connected, even in the most remote areas.  With our own customer built technology, we’re able to unlock safe capital for everyone, regardless of branch coverage.

And what we have seen proves just that – a mobile first lender is not just more convenient for busy, urban communities, but expands the reach to unlock new populations who have not had access to credit before, which is significant.

MH: So what’ the vision for LendUp looking ahead?

SO: Going back to my time at Grameen, I know that credit is not the only solution to people’s problems, we have to include education, general health and empowerment.

At LendUp, credit is just our first product. Right now we’re focused on expanding geographic coverage to more states. We’re licensed today in 17 states; the steps for getting licenses for lending and money transfer state by state, which are separate approvals, are not trivial.

Beyond geographic growth, LendUp wants to create a path to better, safer, financial products through credit building and other products. We have a partnership today with Moneygram; a local bank; and a few non-profits. We will be adding products and services over time to serve our mission of using software to get people to a better financial place. We call it Ladders, Not Chutes.

MH: To wrap up, coming up this week is the Center for Financial Services Innovation’s EMERGE forum in Austin, TX. You mentioned that you’ll be on stage this week. Do you have any message you’ll like to convey to the attendees?

SO: I’m a huge fan of CFSI and what they’re trying to do within the financial services industry.

If I had to say anything it would be to encourage institutions to take action. Do not just see the event as an opportunity to learn what others are doing: Focus on actions that make an impact and measuring results, so that we can see success in serving the market.

I like what CSFI is doing with its partnership with JPMorgan Chase, but we could do even more. We need an incubator like Y-Combinator for the financially underserved.

I’d like to see: 1) VC’s getting more involved; 2) government policies to enable innovation; and 3) more startups in this space,  since there’s not only a market, it’s a real opportunity to make a difference.